Nike is proud to celebrate the LGBTQ community with this year’s BETRUE collection that supports inclusion on and off the field of play. Nike believes in the passion and pursuit of sport by all athletes, a message articulated in the EQUALITY initiative that launched last February.

BETRUE started in 2012 with a grassroots effort led by passionate Nike employees. To connect with the LGBTQ community in a personalized way, they made a few styles with NIKEiD in celebration of Pride month. United by a common mission to innovate for all athletes* and provide equal access to sport, these employees developed a plan to bring BETRUE to more people. “The key for us was to create something that people could unite around to show their support for LGBTQ athletes,” says Robert Goman, LBGT Network Leader at Nike. “Sporting your rainbow in the gym or on a run became a way to feel like you belonged to something larger – you were connected to being ‘out’ or being an ally. The rainbow has and always will be incorporated into the BETRUE product in some way.”

The 2017 BETRUE footwear and apparel collection pairs the rainbow with other prominent symbols of Pride, including the color pink and the triangle, with Nike innovations and the encouraging message, RUN FIERCE, printed onto the shoes’ sock-liners.

These innovations include a number of “firsts” introduced in the 2017 collection, including the first eight-color, HD rainbow Swoosh design (on the Nike Flyknit Racer) and the first rainbow VaporMax Air unit (on the NikeLab Air VaporMax Flyknit). The collection also includes the Nike Cortez, one of the company’s first footwear releases, with “BEEN TRUE” written on the sockliner — underscoring Nike’s longstanding commitment to equality and expression. It is also the first time the BETRUE collection will be available in key cities globally.

In the U.S., since 2012, Nike has provided approximately $2.5 million in financial and in-kind support to LGBTQ causes.

Learn more about the 2017 BETRUE collection below.

The NikeLab Air VaporMax Flyknit BETRUE has the first-ever rainbow-colored VaporMax Air unit, maintaining the eight colors of the original 1978 Pride flag beneath a dark violet Flyknit upper. Each VaporMax Air unit  is created at the Nike Air Manufacturing Innovation facility in Oregon, where Nike designers and manufacturers came together to create an entirely new process for dyeing an air bag with more than two colors for the first time. Using vacuum-printed sublimation to achieve maximum brightness and a smooth, HD gradient, Nike designers achieved the first-ever eight-color, rainbow Swoosh design on the lateral side of the black and white Flyknit Racer BETRUE. The rainbow gradient references the original eight-color Pride flag. The medial-side Swoosh design is pink, referencing the color’s widespread use in the LGBTQ community. Dually marking the 35th anniversary of the Nike Cortez, the suede Cortez BETRUE pays homage to one of Nike’s first footwear releases with BEEN TRUE printed onto the sockliner. A six-color rainbow ribbon spans the length of each shoe’s tongue; underneath, the left shoe’s tongue is pink tint, and the right shoe’s is blue tint. Designers imagined a rainbow flag draping over the shoe to mirror the idea of a person wearing one. The shoe’s dubraes read BETRUE in cursive. The Nike Air Zoom Pegasus 34 BETRUE draws inspiration from unicorns with a platinum upper, pink Flywire technology, a multicolor midsole and outsole and pearlized, reflective accents, including a white aurora Swoosh design. The shoe connects to the BETRUE Muscle Tank, which features a unicorn against a black, triangular background. The foxing has a reflective unicorn horn detail, while collar lining creates a neon rainbow spanning across both shoes. The Nike Dry BETRUE Muscle Tank comes in white with the BETRUE logo and a multicolor unicorn backgrounded by a black triangle. The Nike Sportswear BETRUE T-Shirt comes in white with a Pride-inspired rainbow Swoosh design positioned next to the BETRUE logo. The Nike Equality BETRUE T-Shirt comes in black and has the word, EQUALITY, in rainbow colors. Worn together, the Elite Cushion Crew BETRUE Running Socks form a rainbow gradient from the wearer’s left to right. They are made with strategically placed cushioning and a reinforced toe and heel to provide comfort and durability. The 2017 BETRUE collection launches June 1 on Nike+, nike.com/nikelab and at select retailers, with the exception of North America, where it is available starting June 5. Learn more at nike.com/betrue. 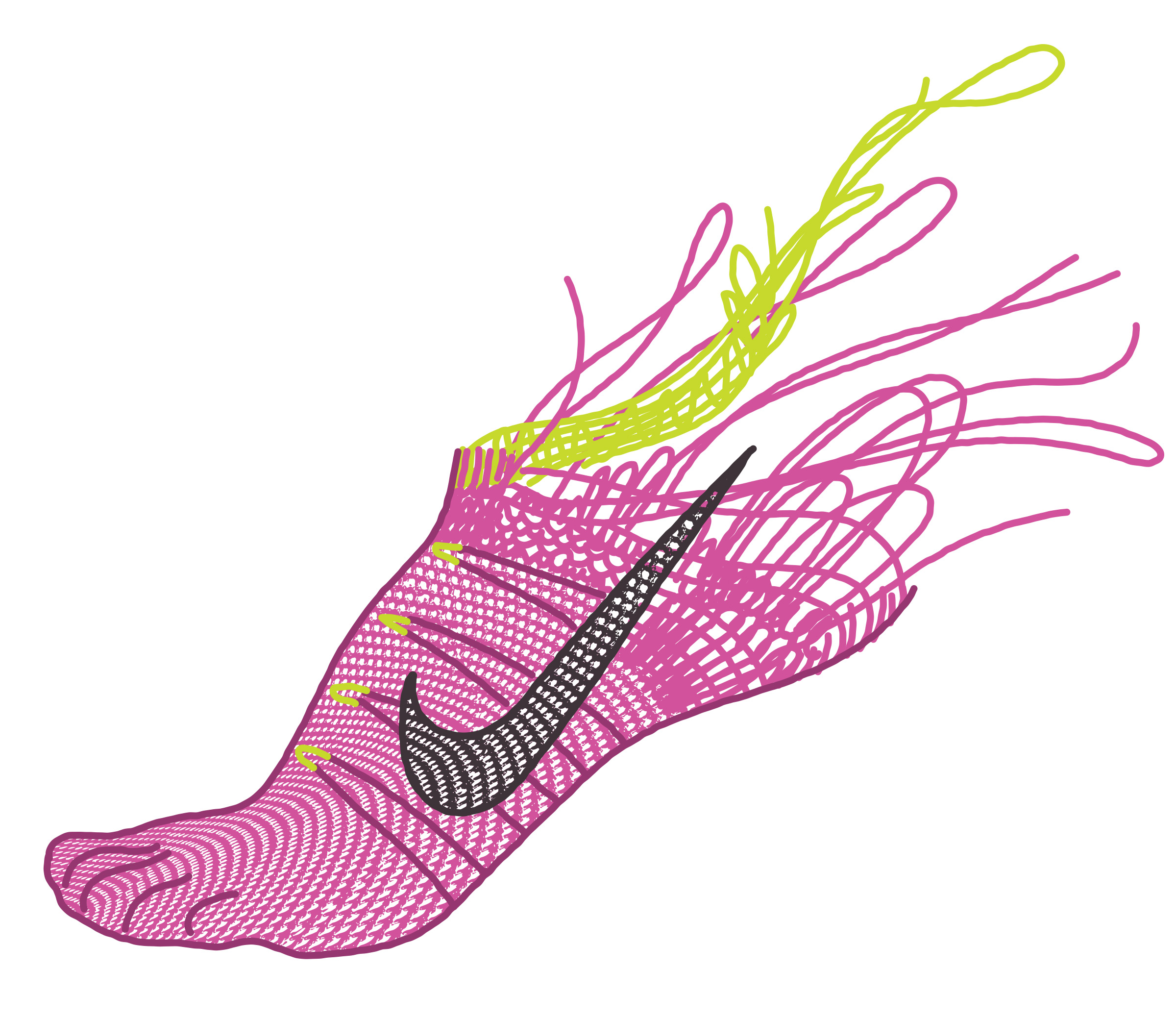 Flyknit technology engineers every stitch of a shoe upper to deliver maximum performance while producing 60% less waste than traditional cut-and-sew methods. Since 2012, the technology has reduced nearly three and a half million pounds of waste.

Approximately 71% of Nike footwear and apparel products contain recycled materials, in everything from apparel trims to soccer kits to Flyknit yarns. For example, since 2010, Nike has transformed more than three billion plastic bottles into recycled polyester for use in Nike performance products. Learn more about Nike Grind, a palette of premium recycled and regenerated materials, here.